As a child, re-wearing my clothes was never seen as a problem. In fact, I had a skirt I called the ‘Rangeela’ skirt named after Urmila Matondkar’s sultry song, which I wore till it was in tatters. I never felt belittled, un-fashionable or even awkward.

That was the late 90s or early 2000s. A few years later… with fast fashion, digitally printed garments, and the speed of the machine loom, I was left with a cramped wardrobe and a greedy heart.

Sustainability is the current fad in the fashion world. But, how much of this word, do you think has actually translated into responsibility? Very little. Barely any evidence of it can be seen outside of glitzy fashion weeks, a few boutique stores and fewer opinion pieces in magazines. Sustainable fashion is nothing more than virtual reality; fashion designers and brands are the drivers, Instagram is the conduit.It’s presence is merely viral, and like most things, has become a sort of talking point in fashion.

I did a random survey amongst my peers, mostly aged 25 – 28 about what’s the first thing that strikes them about ‘Sustainable Fashion’. The answers were varied, not what I expected and opened my eyes to the ignorance of this subject. Some said it was a ‘kurti and jeans’ and other gave answered with a little more thought.

For better understanding, sustainable fashion is a philosophy of design which ensures that sourcing, manufacturing and retailing is practiced ethically. Basically, the social, environmental and commercial aspects of the business ensure the least carbon emission. The word ethical is often associated with it because these goods are ethically sourced, causing minimal or no impact on the environment.

When I was in my teens and didn’t the know the first letter about eco-friendly fashion, I would have traded my Versace for Veromoda, Ferragamo for Forever21 and Zimmerman’s for Zara without the blink of an eye. Because these labels meant I could have a new identity every single day. But zoom over to today, luxury for me is finding a new story in my mum’s kanjeevaram saree. 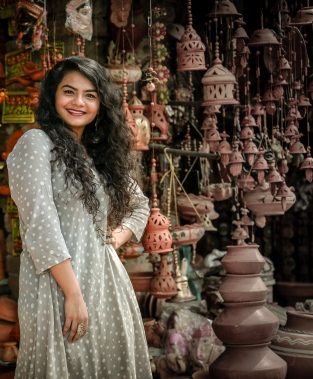 With the evolving grammar of Indian textiles, there’s been a lot of action among the younger, fresh-out-of-college designers who’re raising awareness about the subject. A few neo-designers, though are playing the sustainability card as marketing strategy to a ‘fast-fashion customer,’ ready to buy mill-produced chiffon renamed as ‘ethically produced, cruelty free silk’. Now, how is cruelty free silk produced? And even if you did know, will you counter question once you’ve made up your mind to make the purchase? I guess not.

While it is disturbing to see such malpractices happen on a regular basis, there’s always a bright side. The flip side of the problem is how the biggest names in mass-production are doing their bit by introducing a dialogue of sustainability between Gen X. Be it Adidas making shoes out of sea-waste or HM starting a new line called HM Conscious. It gives momentum to the idea and makes it more mass.

But the crux of the problem is still unaddressed. For the average twenty-something girl, who shops every week, sustainable fashion simply means paying up to three times more for a similar looking cotton jacket, no matter the cotton was farmed organically sans the farmer suicides. Sustainability as an idea might sound idealistic and guilt-free, but since clothes are about evoking an emotion, the first emotion is that they’re expensive!

How do you counter that and justify the cost to a Facebook news-feed mindset? Gen-next designer Chirag Nairaini answers, “Sustainable fashion is expensive because it has more of workmanship and is handcrafted. Everything needs to be processed by hand and it is not mass production. Developing a sustainable product is more intricate and quite time consuming.”

“To make them realise that sustainable fashion or organic fashion is an experience of its own. In once or twice of their (consumers) consumption they will realise the difference. It carries a feel good factor to it as well.” he continues.

Rightly so, experiencing the responsibility and emergency of the situation might change the attitude, but how does one reach out to the milenials? It’s coming back full circle; coming back to Instagram. ” Digital media and great imagery have changed the way we understand tough subjects like sustainability. But it’s only through these that the topic can spread like wildfire. Even if ten people hit ‘like’ out of your 10k followers, the message is being sent.” chides Gautam Gupta, designer at AshaGautam.

Perhaps, it’s still too soon to judge the subject that’s underway to become a revolution. For now, though, spreading the word till it becomes wildfire should be the only motto.

Leave us a comment to tell us if you liked it! Cancel reply